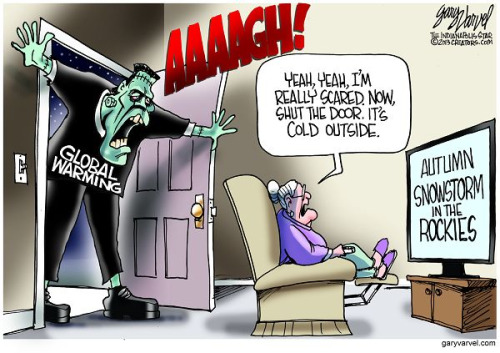 Promoters of ‘official’ climate, which is defined as the works of the UN IPCC, are desperate. Twenty of them, including Intergovernmental Panel on Climate Change (IPCC) members like Kevin Trenberth, asked the Obama administration to file Racketeer Influenced and Corrupt Organizations Act (RICO) charges against climate deniers. All but two of the twenty are at Universities, and the two are career bureaucrats associated with the National Center for Atmospheric Research (NCAR). They all live off the public purse, but somehow in the weird world of climate science that is untainted money. The RICO charge is ad hominem, not about the science. If Virtually all the research funding for global warming comes from government and goes to those supporting the unproven hypothesis. There is no comparison between the amounts of government money going to the ‘official’ side of the science and that going to skeptics.

Their RICO charge is so ridiculous it hardly warrants a response, but it does require scientific perspective. It is important to note that none of the authors of the academic peer reviewed papers and books, they claim provide the evidence for their charge, signed the letter. It is likely that most, if not all of them or their institutes, receive funding from a government beyond their academic or government salaries.

The RICO charge is a particularly nasty form of ad hominem attack. By applying it in the global warming case, it tries to make criminals out of people doing their job properly. The real criminal part of their enterprise is that skeptics are doing what scientists are supposed to do, that is disproving the AGW hypothesis. They accuse these properly named scientific skeptics of performing the scientific method, either through ignorance of the method or to silence them. The twenty, like the IPCC and its supporters, directly or indirectly thwart the scientific method by accepting the hypothesis as proven. They then deflect or ignore overwhelming evidence that the hypothesis is wrong including failed predictions (projections). They consistently refuse to consider the null hypothesis.

The attack is not surprising because the IPCC created a monster and were driven to keep it alive. Once you create the monster it becomes uncontrollable and even if it becomes a threat to society, the creator will resist its destruction; worse, you have to keep feeding the monster and will take extreme measures if necessary. This inevitability is the moral message of Mary Shelley’s Frankenstein.

Establishment of the IPCC through the World Meteorological Organization (WMO) put national weather office bureaucrats in control of national climate policy and most of the research funding. They appointed the members of the IPCC and used their offices to promote and perpetuate the unproven hypothesis of anthropogenic global warming (AGW). Extreme measures taken to keep the monster alive included adjusting the record to eliminate previous warm periods and lowering the historic instrumental record to increase the slope of the curve to create or accentuate warming. More recently it was the adjustments designed to offset the pause they directly contradicted the hypothesis. They were on a treadmill for two main reasons. By accepting the IPCC AGW hypothesis as proved, required ignoring or diverting from evidence. It was the destructive effect T.H. Huxley identified when he wrote,

“The great tragedy of science – the slaying of a beautiful hypothesis by an ugly fact.”

By convincing politicians to establish policy based on their information, it became difficult to admit they were wrong.

The natural tendency of any bureaucracy is to perpetuate its existence. This includes expanding the scope and scale of the work, promoting speculative dangers and threats to society, emphasizing the urgency to resolve the problem, and involving as many other public and private agencies as possible. This list summarizes the claims of those making the RICO charge. The structure and involvement of people and agencies has become so large that reduction or elimination is virtually impossible. It parallels the idea of “too big to fail” but becomes, “too important to fail”.

Another challenge is that the numbers of people involved, directly or indirectly, becomes large enough to influence votes and keep the monster alive. For example, how many tax accountants, tax lawyers, IRS employees or anyone else in the taxation industry would vote for a flat tax? Other than those with a vested interest there are many others who Niccolo Machiavelli identified when he said,

One who deceives will always find those who allow themselves to be deceived.

It is also why Upton Sinclair said,

“It is difficult to get a man to understand something when his salary depends upon his not understanding it!”

There is also the problem of admitting error that many find difficult. Tolstoi summarized their plight.

“I know that most men, including those at ease with problems of the greatest complexity, can seldom accept even the simplest and most obvious truth if it be such as would oblige them to admit the falsity of conclusions which they delighted in explaining to colleagues, which they have proudly taught to others, and which they have woven, thread by thread, into the fabric of their lives.”

In The Deliberate Corruption of Climate Science, I identified some of the groups and agencies across the world involved in the promotion and opportunities that the global warming deception offered. They include

· Members of the cabal who chose climate and environment as vehicles for their political agenda.

· Academics attracted by the significant amounts of funding offered.

· Academics with political sympathies for the cabal’s objectives.

· Bureaucrats employed by the national weather offices that comprise the UN World Meteorological Organization (WMO) chosen as the vehicle for controlling the IPCC.

· Bureaucrats with political sympathies with the cabal objectives.

· Bureaucrats in other government agencies, such as Agriculture or Transport that are secondarily affected by weather and climate issues.

· Departments of Education who directed unbalanced teaching of only the ‘official’ science as Justice Burton UK court ruled.

· Politicians who saw an opportunity to “be green.”

· Politicians who saw an opportunity for more taxation.

· Businesses that saw an opportunity for a profitable business guaranteed by government policy and funding.

· Individuals who saw a career or business opportunity.

· Environmental groups who supported the political objectives of blaming humans for the world’s ills.

· Non-Government Organizations (NGOs). Maurice Strong reconstituted the term coined by the UN in 1945 for the Rio 1992 conference. It purportedly gave voice to organizations not part of a government or conventional for-profit businesses. At Conference of the Parties (COP) climate meetings, they constitute at least half of the attendees.

· Most of the media who actively supported the AGW hypothesis.

There is one thing likely about most of these people, 97 percent of them know little or nothing about climate change.

The Climate Conference of the Parties (COP21) scheduled for Paris is clearly facing failure, which is pushing IPCC defenders, such as the twenty making the RICO request, to extremes. Their comparison of scientists trying to perform proper science to organized crime leaders is beyond outrageous. It is especially egregious because the people making the charges are guilty of scientific malfeasance. While not necessarily criminal, it is worse in the damage it has and will do to everyone. The monster they created using incorrect science became the justification for imposing destructive, expensive, and completely unnecessary policies on the world. These policies will do far more damage to the poor and the environment they claim to protect. As it was anonymously said,