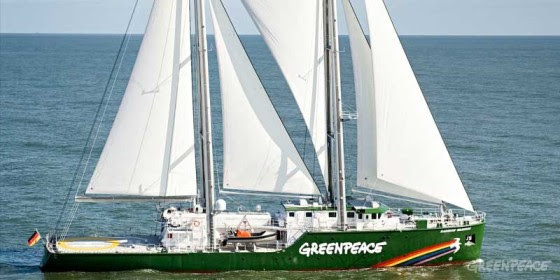 Dr Patrick Moore “They have a whole fleet of ships, pretending the $32 million Rainbow Warrior III is powered by the wind when it has two large diesel engines for propulsion. I like to joke that when we first sailed against US hydrogen bomb testing in Alaska we did not have a nuclear weapon on board.”

Things have not been going well for environmental NGO Greenpeace in the last few months, there was the insanely stupid attempt to interfere with Gazprom operations in the Arctic, which led to the Arctic 30 enjoying the hospitality of the Russian penal system for a few months. Greenpeace also lost a ship, the Arctic Sunrise which is still impounded in the Russian port of Murmansk, and likely to be there until it rusts away and sinks, or ends life as a towed target for the Russian Navy.

In the words of Greenpeace Co-Founder Patrick Moore “I’d like to think that Greenpeace left me, rather than the other way round. I became a sensible environmentalist. Greenpeace became increasingly senseless.”

Greenpeace apart from being increasingly senseless have also been caught losing millions in donations by failed currency trading, been labelled as a threat to national economic security, and one of their top executives has been caught out hypocritically commuting by air from Luxembourg to Amsterdam.

All this makes for very bad publicity for Greenpeace:

“Greenpeace has been careful to cultivate an image as intrepid defenders of the environment,” editorializes Der Spiegel, a major German newspaper. “Calling themselves the rainbow warriors, activists hang from factory chimneys, throw themselves in front of whaling ships or risk jail time in Russia by calling attention to the plight of the Arctic.”

“Now, another activity has been added: playing the financial markets,” Der Spiegel adds. “For an organization almost entirely financed by donations, the revelation is a PR disaster, endangering from one day to the next the greatest asset Greenpeace possesses: its credibility.”

Even that organ of left wing biased climate change propaganda the UK Guardian has turned against Greenpeace:

The Guardian, a left-wing newspaper, has been especially critical of Greenpeace lately. The paper even obtained internal documents detailing the disarray within Greenpeace International.

A November 2013 document obtained by the Guardian shows that Greenpeace’s executive team was for years fully aware of major problems within the group’s finance department.

“[The] international finance function at GPI [Greenpeace International] has faced internal team and management problems for several years and the situation did not improve during 2013 despite efforts and support,” says the Greenpeace document.

India’s Intelligence Bureau has come to the conclusion that Greenpeace is a threat to the countries national economic security:

The Indian Express reports that the Intelligence Bureau submitted a report to the prime minister’s office saying Greenpeace was “negatively impacting economic development” through political activism and its anti-fossil fuels agenda. The reports says that Greenpeace activities have reduced the country’s GDP by 2 to 3 percent a year.

The report mentioned other activist groups, but singled out Greenpeace for trying to “change the dynamics of India’s energy mix” and orchestrating “massive efforts to take down India’s coal fired power plants and coal mining activity.”

“It is assessed to be posing a potential threat to national economic security… growing exponentially in terms of reach, impact, volunteers and media influence,” the report warns of Greenpeace, adding the group is finding “ways to create obstacles in India’s energy plans” and to “pressure India to use only renewable energy.”

It is not just in India, but other countries as well there seems to be a shift towards curtailing the activities of Green NGO’s, in Tasmania the politicians want to remove charitable status from Green NGOs and give the status to real charities:

The government is being pressed to alter the charitable status of environmental groups after a Liberal MP successfully argued to his party that the groups are not “real charities” like the Red Cross or the Salvation Army.

A motion introduced by MP Andrew Nikolic to the Liberal federal council called for environmental groups to be stripped of charitable rights, such as the ability to receive tax-deductible donations.

Nikolic, the federal member for the Tasmanian electorate of Bass, said the groups should not be subsidised for political activism, some of it which he claimed was illegal. The conference motion passed the motion unanimously.

The news of Greenpeace’s massive loss of donations currency trading was soon followed by the revelations that Greenpeace’s international program director Pascal Husting was regularly taking the plane from his home in Luxembourg to the office in Amsterdam:

The UK Telegraph noted that Greenpeace actively campaigns against “the growth in aviation,” which the group says “is ruining our chances of stopping dangerous climate change.”

None of these antics have done much to bolster Greenpeace’s declining credibility with its life blood, the millions of people who make the small donations that keep Greenpeace functioning, instead they have been shown to be nothing more than one of those duplicitous  corporations the environmentalists so love to despise.

6 thoughts on “Greenpeace has Become a Corrupt Organization, that Promotes Alarmism!”