The green movement doesn’t like Fracking but they do like Wind. Why? Fact is wind is intermittent, drives people into fuel poverty and has to be supported by subsidy. Fracking on the other hand has reduced energy prices in the US, created thousands of jobs as energy prices tumble to the benefit of US industry and needs no subsidy. So why has the Green Lobby reacted so viciously to fracking. Their web sites are a liturgy of lies and obfuscations.

They are the great unwashed, the swampies and the anti capitalist objectors and yet they are also rent a mob. Never has a Wind Farm objection rally needed the police manpower that fracking does. Truth is that it is simply political activism, what Patterson referred to as the Green Blob. How seldom do we see locals in their ranks. Those that are have believed the hype and failed to properly study the fact. Flaming faucets: cold bed methane in groundwater that would be there without any mining. Nothing to do with fracking at 8000ft well below groundwater. There are dangers, but none that cannot be adequately addressed by good management and oversight by an effective regulator. After all it is not in the developers interest to be faced with expensive clear up costs and loss of production.

So what about the real legacy of fracking. In the south we haver been drilling the Whytch oil field for years and few even know it exists. Fracking, as a technique, has been used for the best party of forty years but new equipment and deep wells have brought it into it’s own more recently. Centrica have been fracking wells for gas in Norway for the last few years. Interestingly they are using mostly Scottish engineers. Good well paid jobs for the indigenous population.

So what effect does fracking have. Essentially a fracking site will experience disturbance for about forty weeks after which it will revert to a simple well head. 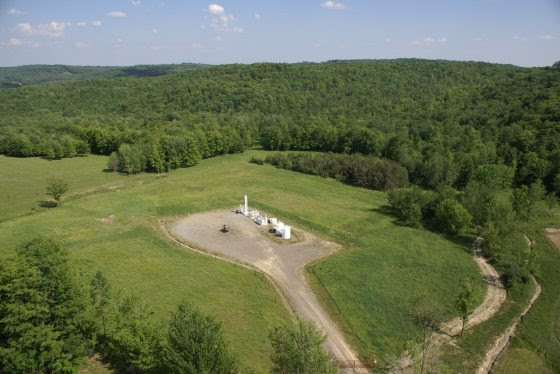 This is in Marcellus, New York State, and cannot be seen from the road. The alternative is something like this at Ardrossan. 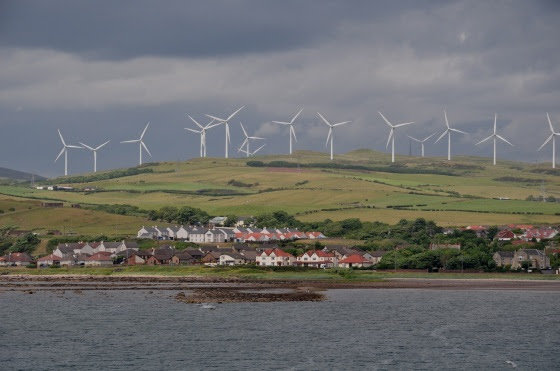 Of course the first runs 24/7/365 for some forty years and the second runs as about 21% when the wind blows and has a life of about 16 years before it needs re-powering. We have all been promised a maximum of 25 years but do we believe them? No way. Read the small print. In practice what will happen is either the death of the industry with wholesale bankruptcies and rusting hulks littering our scenery or bigger monstrosities here for forty years or more.

For a safe, sustainable, future the truth is we need deliverable energy at a cost we can afford with a mix of clean coal, gas, nuclear and hydro. It is without doubt that as civilisation moves forward we will have an expanding demand for electricity, not because it is green, but because it is easy. Cars, buses, trains will all demand much higher energy requirements than we could currently(sic) supply. So listen to the Royal Geological Scociety, the Nuclear Industry and the engineers in the power industry. Don’t listen to the Swampys and green ideologues as they peddle dis-information. Get your facts from people who know, not the Green lobby with their eschewed values which even their founders now despair of.

We need to build a future based on fact, not fantasy!

One thought on “Fracking is by Far….Better than Wind Turbines!”