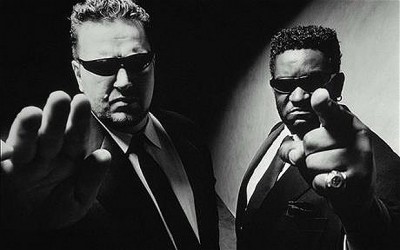 Back in October last year we covered the antics of another foreign owned wind power outfit struggling to come to grips with the fact that Australian rural communities have had – as they say – ‘a gutful’ of the wind industry’s lies, treachery and deceit. And they’ve especially had enough of the bully-boy, stand-over tactics adopted by the thugs employed by the likes of Trustpower and Epuron:

The vast majority of rural Australians – living with or faced the threat of these things – have worked out the scale and scope of the economic fraud behind it all.

They’re hip to the fact that the $45 billion in subsidies designed to be siphoned off to these characters over the remaining life of the LRET is being used to literally steal their homes from under them:

And they’re wise to the fact that the characters programmed to destroy every last inch of Australia’s most productive farming country, couldn’t give a flying fig about any living soul within these communities; or the laws that are purported to ‘protect’ them:

Armed with that knowledge, groups are getting organised and turning mere grumbles into a simmering rage. And the rage is not limited to Australians. Oh no, it’s an International thing.

Precisely what you’d expect where the wind industry is universally peopled by liars, bullies and thugs that – in their previous callings as second-hand car salesmen – never had to deal with people armed with enough knowledge to call them liars and enough bottled up anger to fight back.

Our first story is from upstate New York, where a wind power outfit’s goon – faced with more than just a little opposition – decided to ‘shape’ the debate by attacking and assaulting a middle-aged mother.

ITHACA, NY – “I want the cops here right now!” called a clearly upset woman from the back of the Enfield gymnasium.

It was approaching the end of an over two-hour-long, often heated discussion about the Black Oak Wind Farm, a proposed set of seven wind turbines to be located in Enfield. The meeting hadn’t been without its loud moments of chaotic cross-talk, but it appeared as though things had escalated.

“I haven’t been able to talk all night because I’ve had a gag clause… I’m afraid I’m gonna get sued! And then the wind people just grabbed my arm. This is the kind of shit I’m talking about!” said the woman, whom the police report identified as Theresa Guler of Enfield.

Margeurite Wells, vice president and project manager for Black Oak, has denied that the Good Neighbor Agreement signed by some residents carried a “gag clause.”

A man, who identified himself as Guler’s husband, added, “Lexie just grabbed her arm and pulled her out the door… that’s real nice representation from the board of Black Oak Wind Farm.”

The person he was referring to was Lexie Hain, who serves as secretary on Black Oak’s Board of Managers.

Details of the police report

Here is how Guler described the event to the Tompkins deputy:

“I walked out of the gym area to get a drink. When I did so, I noticed a female named Lexie staring at me. She was doing this in a way that made me feel intimidated. Lexie and I have a history because she is upset with me and Rich Teeter about the wind project.

As I was walking, Lexie grabbed onto my left arm near my elbow and squeezed. I instantly felt pain, and she wouldn’t let go. I have had nerve problems in that arm, and this has made it worse. I was scared and in a lot of pain from what Lexie did to me. I don’t get into fights, and I did not start this.”

Guler declined to have an order of protection issued.

Following an investigation, Hain was charged with “harassment in the second degree: physical contact.” She is due to appear in Enfield town court on January 4.

Hain made the following statement to the Ithaca Voice: “As reported, tensions at the meeting were high. This was certainly the case in this instance.”
Ithaca Voice

‘Tensions were high’, well, what a surprise! A band of liars prepared to attack an unarmed women, posing no threat, seems to expect all to bow down before the Wind Gods; and relinquish every hard won right, without so much as a whimper.

The wind industry routinely trots out 4 or 5 year old community surveys (where the respondents don’t and will never live within commuting distance from these things) that purport to show the ‘love’. But, when the question is put fair and square to people that know they’ll end up as wind industry “road-kill”, the results tend to come out a little differently:

After years of being lied to, bullied, berated and treated like fools (at best) and “road-kill” (at worst), for most, the ‘gloss’ comprising wind industry PR efforts to ‘win hearts and minds’ has well and truly worn off.

These days, the communities aren’t so gullible; they aren’t so welcoming; and they aren’t willing to take it lying down. Despite having the skills of the best spin doctors in the business at its disposal, it’s “outrage” that’s become the word synonymous with the wind industry, wherever it goes. In short, rural communities have had enough – and they’re fighting back, by fair means and foul:

And, it seems, that Community defenders aren’t about to lay down their arms, any time soon; as this story from Ontario attests.

Chatham-Kent police are investigating an apparent act of mischief at a wind turbine on Mud Creek Line in Dover Township.

Police say it appears someone shot three rounds from a rifle at the wind turbine and officers have been able to locate and seize one of the rounds for forensic examination.

Investigators believe the windmill was shot sometime over the past few days, but they haven’t been able to identify a suspect yet.

Anyone with information is asked to contact police or Crime Stoppers.
Blackburn News 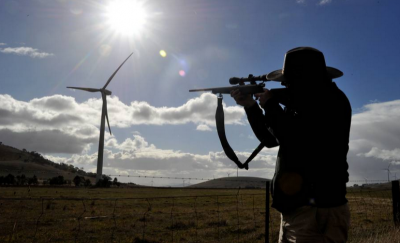 Citizens are bound to react against any industry quick to destroy their lawful rights to live in and enjoy their own homes. And they’re bound to react violently when that industry is devoid of any moral compass, let alone human empathy. An industry that openly displays a callous disregard for basic human rights – such as the ability to sleep comfortably in one’s own bed – using its shills to call them “wind farm wing-nuts” and otherwise dismissing or ridiculing their wholly unnecessary suffering – as the wind industry’s parasites do, on a daily basis:

If anybody in government still believes that the politics of “renewables” is all about blindly favouring them, then the events outlined in this post and the posts linked above should provide pause for thought.

The warm and fluffy tag “renewables” is used to garner political support for the wind industry – but there’s a distinction between giant industrial wind turbines grinding away in the next paddock at 2 in the morning and solar panels on the house next-door. STT’s yet to hear of a case of anyone unloading their grandpa’s .303 on their neighbour’s solar panels.

While the local police play CSI and investigate a crime scene, it’s clearly arguable – on moral, if not legal, grounds – that what is laid out in the story (and the posts linked above) is conduct aimed at preventing a series of greater – and wholly unnecessary – crimes.

Faced with the threat of sonic torture, smashed property values and the risk of death and injury from collapsing 290 tonne Danish Dervishes, self-igniting turbines and “uncontrolled flying blades” – from the developer’s potential victims’ viewpoint – it could equally earn the tag of community “self-defence”. And self-defence is a complete defence, to all bar murder.

People shooting up turbines and dropping MET Mast are ostensibly acting to protect their homes, families and businesses from an acoustic trespasser (see our post here); and so the “castle doctrine” clearly comes into play.

That doctrine is one of some force and antiquity – it’s been on the books for nearly 400 years, when lawyer and politician Sir Edward Coke (pronounced Cook), scratched it out in The Institutes of the Laws of England, 1628:

“For a man’s house is his castle, et domus sua cuique est tutissimum refugium [and each man’s home is his safest refuge].”

And so, if a few pro-family and pro-community activists have to drop a MET mast here and there, or plug away at the turbines that destroy their right to sleep in their very own homes, to make their point in the active defence of their homes, and the health and safety of their families, it’s action that’s probably excusable and clearly understandable.

And, all the more so, when those that are paid handsomely to protect thehealth and welfare of their citizens, do little more than spin propaganda on behalf of the wind industry – a form of malign indifference, at best.

Many a good revolution kicked off with a handful of hotheads out to make their point, with a few misdemeanors against the property of the powerful; acts quickly deemed ‘threats to civil order’, if not ‘crimes against the state’, by those under threat – with the actors just as quickly rounded up in chains.

In the main, efforts aimed at suppressing the outrage that led the offenders to act, and punishing them for their actions, only added to their fury, and encouraged other, less passionate souls, to eagerly join the fray; and, thereafter, the rest – as they say – “is history”.