The Anatomy of a Wind Farm Contract – Part 2 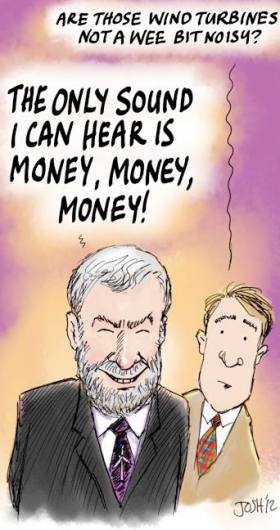 In my previous blog I explained how a typical wind farm contract consists of two divisible parts, an Option and a Lease. When looking at an Option, I came to the inescapable conclusion that by selling the wind farm developer an Option, the landowner essentially gave up any control over his own land for extended (potentially endless) periods, in return for often trifling sums of money.

In this blog I want to start looking at the second part of the contract – the Lease. This part forms the majority of the contract document, and we may need more than one blog to cover it all.

These contracts are about money, and clearly we need to know just how much a landowner can make, how quickly he or she can make it, and whether on a purely monetary basis it is a worthwhile exercise for a landowner to consider.

“… the Tenant from the Commencement Date for the Term YIELDING AND PAYING therefore to the Landlord during the first ten years of the Term the Rent of three per cent (3.0 %) of the Gross Operating Proceeds per annum and after the first ten years the Rent of three and a half per cent (3.5%) of the Gross Operating Proceeds subject to the provisions for review as hereinafter contained or €5,000.00 per Megawatt of capacityINSTALLED

whichever of (i) or (ii) shall be the higher;

The first thing to realise is that the payments made by the developer (the Tenant) to the landowner (the Landlord) are now called ‘Rent’. As the term of contract in my contract is 25 years, what the landowner receives in cold cash is three percent of the Gross Operating Proceeds for ten years, and thereafter three-and-a-half percent of the Gross Operating Proceeds for fifteen years. However, 25 years is actually one of the shorter periods you will find on one of these contracts, so look very carefully at the definition of “Operating Period” when faced with one of these contracts.

.
The first question obviously is: what is meant by ‘Gross Operating Proceeds’? Well, I am not a bookkeeper but I do remember my lessons which told me that “Gross” means all your money as you make it, whilst “Nett” means the money you have left after you have paid what you owe (your “take home”).
.

Wind developers clearly speak a different language compared with the rest of us. Their definition of “Gross Operating Proceeds” is this:

“x-y:
Where x = the gross receipts (excluding VAT or any substituted or similar tax) from electricity sold by the Tenant and generated by the Wind Turbine(s) on the Premises excluding any together with the receipts if any that may arise from the sale of green credits or other similar environmental scheme and;
y = such costs as the Tenant may have to pay in respect of the electricity generated by the Wind Turbine(s) on the Premises but limited to (i) the costs and charges to join and remain a member of the Pooling and Settlement System, if any and; (ii) any non-capital costs or charges associated with the purchase from the Electricity Supply Board or any third party purchaser of electricity for the provision of auxiliary power to the Accommodation Works or the Wind Turbine(s) as certified from time to time by the Auditors Certificate and; (iii) any transmission, metering or distribution costs.”

Now that is a different meaning to the “gross” as ordinary people understand it.

And then when looking at “x”, which is the amount of the so-called “gross receipts”, that is the money received by the developer for electricity actually sold by the developer. If the developer does not sell any electricity, or is forced to dump electricity, that means there is no receipt. And even these ‘receipts’ have deductions made from them, namely tax, green credits, and subsidy payments.

And once we reach the nett value of the “gross receipts”, we now have to subtract “y” from those. The value of “y” is essentially all and any operating costs, including the IWEA membership fees, and the cost of electricity to run the back-up power when the wind turbines are not generating their own electricity, which in winter is most of the time as the wind blows too hard and the turbines are shut down, whilst in summer there is little wind.

As there is no electricity sold, the landowner loses out. Of course, the developer does not lose out, as it is getting the subsidies (money paid by electricity customers in the form of the PSO Levy) and curtailment payments (money paid to the developer by the taxpayer for not generating). However, as these payments are not for electricity sold, the developer does not have to share that with the landowner. No wonder IWEA are always asking for increased subsidies, and no wonder, in countries other than Ireland, when the subsidies have been withdrawn, the “green” developers have vanished into thin air.

Wow! Is there anything left of this “gross” after that? And the landowner gets a measly 3% for the first ten years, at which stage the turbines are probably burnt out and need to be replaced (given what we now know about the life cycle of these giant turbines – you are lucky if you get ten years out of them – more likely three to six years), which in turn means massive operating costs = more money taken off the so-called “gross” amount.

I would guess that because of this creative bookkeeping, most landowners will be plumping for the €5000.00 per MWINSTALLED

” is not defined in the contract. If something is not specifically defined in a contract, it is given its ordinary meaning. I would suggest thatINSTALLED

means up and running and connected to the grid (as opposed to ‘erected’), which might mean more delays before the landowner actually sees some of that cold hard cash.

.
“… and where no turbines are installed on the Premises the following payments will be made:
10,000EURO

per annum for a site sub-station and ancillary equipment;
5,000EURO

per annum for a Grant of Deed of Right of Way and Wayleave;
2,500EURO

per annum for a consent to erect turbines on neighbouring premises and where such consent is needed because of reduced distance to neighbouring boundaries only;
all of which payments shall be exclusive of any Value Added Tax which may from time to time be properly chargeable and charged thereon by the Landlord clear of all deductions save those required by law.”

This clause confused me. If these payment options do apply to the landowner that is actually hosting the wind farm, one would think that the host-landowner wouldMAKE MORE MONEY

by not having the turbines built, as the Gross Operating Proceeds don’t seem to be enough to feed the dog, let alone make a nice living without all the hard work that constitutes farming (assuming that most landowners that host wind farms will be farmers or at least owners of rural land / farm land).

.
However, It is doubtful that the wind developer is going to enter into the Lease before the wind farm is up and running – that is what the Option is for, and the developer will rather pay you your tenEURO

(a year, hopefully) for the Option for as long as the developer can stretch that Option out.

One would imagine that the developer will only enter into the Lease with the landowner who is accommodating the actual wind farm when the wind farm is definitely going up, and the Option is exhausted. Otherwise the landowner will be strung along, essentially at the mercy of the developer.

I am therefore guessing that these other forms of payment are for landowners with land adjoining the wind farm premises. This might be the landowner hosting the wind farm, where their land is big enough to also take a sub-station, or where the wind farm is situated in the middle of the property, in which case a right of way might be necessary. I am guessing that this contract is a ‘one-size-fits-all’, and can accommodate those landowners who agree to have a wind farm built on their land, but can also be used to bind those landowners that own land adjoining the host property, assuming that they are willing to contract. Of course they might have no choice if their opposition to planning permission was fruitless, and the wind farm is now destroying their health and their livelihood. These secondary payments will only need to occur once the wind farm is built and operating, and not before.

€2500.00 per year as compensation for being driven crazy by the noise and flicker from the neighbouring wind farm? Count me out. 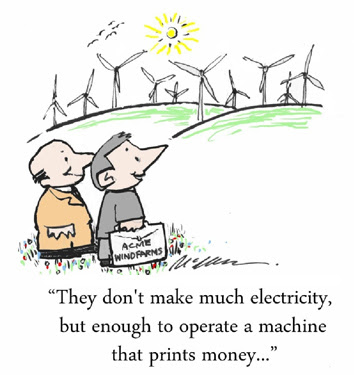 The final sting in the tail concerning payment?

Well, going back to the assumption that theVAST

majority of landowners that host wind farms will be farmers or owners of agricultural land, there is the issue of the effect on the zoning of that land.

After waiting for ten years, the Option is exhausted and the farmer is now looking to cash in on these larger payments of €5000.00 perINSTALLED

Firstly, these payments are fully taxable as rental income, which cannot be set off against ordinary agricultural costs.

Secondly, there is the question of agricultural land tax-reliefs. Some lease agreements do say that the wind-farm company will compensate farmers for the loss of certain farm reliefs. These are usually written in such a way that they cover the farm reliefs that exist at the time of signing. They do not cover subsequent or amended farm reliefs that may be introduced in the future. Again, when we consider that I have seen wind farm lease agreements lasting 60 years, many farmers that have entered into these agreements with wind developers must now accept that the loss of future farm reliefs and payments, coupled with the fully taxable nature of the wind-farm payments that they will receive, will mean that they will be in a financially worse position than they are at the moment. Many struggling farmers grabbed the wind farm option with both hands (encouraged all the way by the IFA). Some of these stories might have very sad endings.

Thirdly, Revenue has made it clear that farmers may no longer qualify for the significant agricultural tax-relief on their lands should they wish to transfer their lands by gift or inheritance. A wind farm turns your land into an industrial site, which means that you are no longer a ‘farmer’ as defined byTAX LAW

, and your lands may fail to satisfy the definition of ‘agricultural land’ under the capital acquisitions tax legislation.

as a business, this is a more restricted capital acquisitions tax relief, as the family home does not qualify for business relief. When we consider that most farms and homes are passed through generations of farming families, using the vehicle of the substantial agricultural reliefs available, farmers face a scary future prospect of not being able to afford to remain on their farms if these taxation reliefs are jeopardised. That means that unless the wind developer is paying you more money than you were getting when you qualified for all the agricultural tax relief that is currently available, you are making a nett loss. When the wind farm leaves, it will be a long time before you can have your land rezoned as agricultural land so as to restore those tax reliefs.

It is for that reason that I would plead with farmers to obtain good and sound legal advice before entering into one of these wind farm contracts.

All that glitters is most definitely not gold.

One thought on “Wind Contracts….Dancing with the Devil!”