Needless Destruction of our Wildlife, for NO Benefit to our Environment! 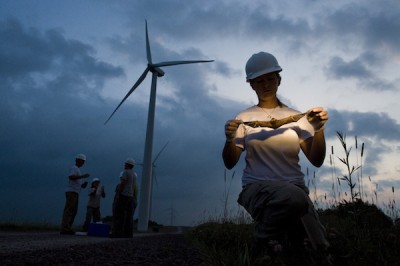 Remember the line about ‘wonderful’ wind power saving the Planet (from something or other)?  No?

It’s certainly not doing much for millions of air-borne critters that are being belted to Kingdom come. Here’s Ken Richard tallying up the carnage.

Bat Destruction….Data Show Wind Energy Is Wiping Out Wildlife, And Not Saving It
No Ticks Zone
Kenneth Richard
8 August 2016

Bats are known to be some of the world’s savviest aerial acrobats. Using their mysterious sonar system and shape-shifting wings, bats adeptly swerve and swoop and dive in flight to avoid collisions with both stable and moving objects.

And yet bats stand no chance against a 200-meter high wind turbine with blades the length of a football field, spinning at speeds up to 275 km per hour. Even if their tiny bodies can avoid a blunt-force collision with one of these merciless steel beasts, just the act of drawing near…