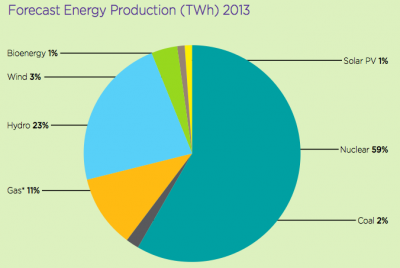 Ontario is the place where the most bizarre energy policy in the world has seen thousands of these things speared into the backyards of homes – in the most agriculturally productive part of Canada. When we say “bizarre” we mean completely bonkers.

Canada has one of the “cleanest” power generation mixes on the planet, with the vast bulk of its electricity coming from zero emissions sources such as nuclear and hydro.

Adding to the lunacy is the fact that wind power outfits are guaranteed to reap fat profits despite market conditions.

Where the wholesale market price for power in Ontario is between $30-50 per MWh, wind power generators pocket a fixed price of $135 MWh – even if there is absolutely no market for it and the Province literally has to pay neighbouring US States to take it.

Then there’s the guff about wind farms ‘saving’ the environment.

The central, endlessly repeated lie (upon which the great wind power fraud rests) is that increasing wind power generation results in decreases in CO2 emissions.

The ONLY claimed justification for wind power – that has no commercial value – apart from the subsidies that it has attracted – is that these things will ‘save’ the planet by ‘killing’ coal and gas – allowing us to go ‘fossil free’ and slash CO2 emissions to a zephyr. Well, that’s what were told ….

Now, to add insult to massive economic injury, the fact that wind power cannot – and will never – reduce CO2 emissions in the electricity sector has been rumbled in Ontario, too.

The wind energy lobby, the provincial government and the mainstream environmental groups continue to claim that wind-generated electricity is “clean” and therefore “good for the environment” (Sarnia Observer, Sept. 23, Turbines rising in Lambton).

This claim is simply not true in the context of Ontario’s electricity sector.

If the provincial government continues to promote wind energy, as outlined in their 2013 Long Term Energy Plan, the increasing amounts of wind-generated electricity will cause CO2 emissions from Ontario’s electricity sector to double between 2016 and 2032.

The latest edition, published in April 2015, can be found here:http://www.ospe.on.ca/?page=pres_lib#peo

These two engineering societies are not against renewables like wind energy. Their report contains a number of suggestions on how the province can better integrate renewable energy sources into the grid.

Let’s look at what this means locally. Suncor’s 100 MW Cedar Point project has an annual real capacity of about 30 MW because the wind doesn’t always blow; so it will produce about 262,800 megawatt-hours of electricity in one year.

This amount of electricity from our other sources – nuclear/hydro/gas – would result in the yearly emission of 10,500 metric tons of CO2.

The same output from Suncor’s Cedar Point project will result in yearly emissions of 52,560 metric tons of CO2 emission because additional gas-generated electricity is required. This is an INCREASE of 42,000 metric tons of CO2 each year for the next 20 years. Had this project not been built, the environment would be cleaner by that amount.

Our two engineering societies should be commended for producing this report. It reminds us that the provincial government has never undertaken a financial cost/benefit analysis, or an environmental cost/benefit analysis of its Green Energy Act; and so it continues with a program that has enormous financial and social costs; a program that will actually increase CO2 emissions and worsen the effects of climate change.
The Observer

We note The Observer’s concerns about ‘climate change’.

Of course, the climate “changes” – change is endogenous to the model. Whether that change is significant or “dangerous”, as the most strident hysterics would have us believe, is yet to be seen. Humans have tolerated severe ice ages and, somehow, miraculously managed to survive. If the planet warms, as we’ve been lately warned, STT is pretty confident we will survive that too: it’s called “adaptation” – a feature of humanity, oft referred to as “ingenuity”.

However, in the main, we leave the topic of global warming or climate change (whichever is your poison) to others.

STT takes the position that man-made emissions of CO2 may increase atmospheric temperatures. But we don’t concede that wind power has made – or is even capable of making – one jot of difference to CO2 emissions in the electricity sector; principally because it is NOT – and will never be – an ‘alternative’ to conventional generation systems, which are always and everywhere available on demand:

STT seeks to completely disconnect claims for and against global warming, and wind power generation.

Wind power isn’t a ‘system’, it’s ‘chaos’ – the pictures tell the story: this is the ‘output’ from every wind farm connected to the Eastern Grid (based in NSW, VIC, TAS & SA – and with a combined installed capacity of 3,669MW) during May. 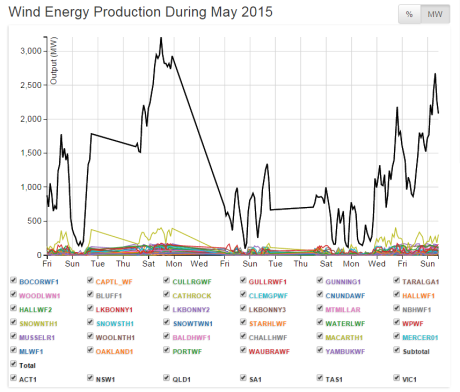 From The Observer’s observations, the wind has about the same level of reliability in Ontario, as elsewhere. With the cost running into the hundreds of $billions; and nothing to show for it, power punters in Ontario could be forgiven for feeling like they’ve been fleeced. 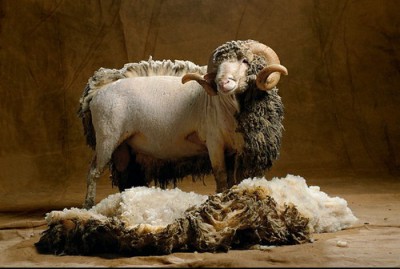 One thought on “Ontario has a Reputation…..for having a Messed Up Electricity System.”