The ugliest and most expensive lawn ornaments… Wind turbines! 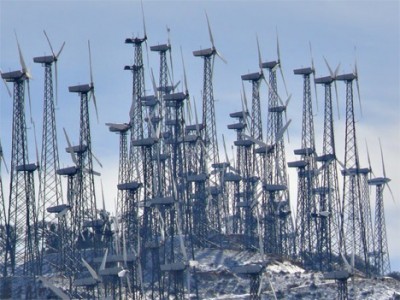 I saw the once verdant wheat fields of Eastern Europe covered with ugly wind turbines, slowly spinning their huge blades into the wind. A few funnel dust swirls were blowing the topsoil into the air. They did not appear to be connected to any storage station that would distribute the electrical power generated. I searched and found out that they were really not connected to any network, were not generating usable electricity, they were all for show to placate the “green growth” European bureaucrats who gave them money to install the eye sores instead of growing crops.

Turbines kill birds on a large scale around the world and disturb humans and wildlife.  According to Save the Eagles International, “contrary to what we are told, wind farms will cause the extinction of many bird…